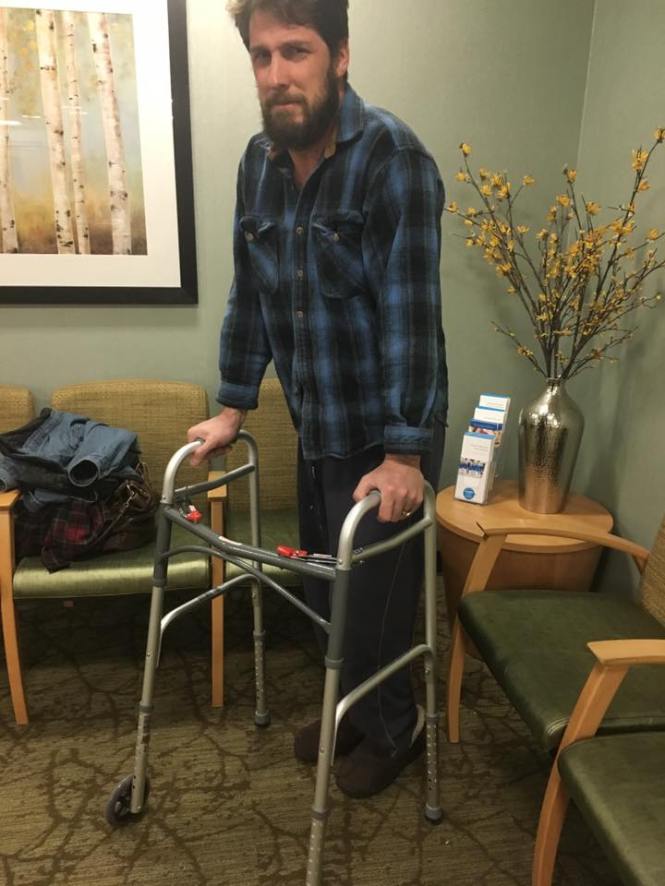 Our journey through back pain started many years ago, but became substantially worse in November of 2016. We’re pretty sure it was due to our recent move to the farm in August. Anyway, we had an MRI done in February after our chiropractor said that there was very little left that he could do for him, as he just continued to get worse even with adjustments, supplements, massage, stretching, etc. The MRI showed a substantial amount of damage to his L5/S1 disc, and some damage throughout all of his lower back. His symptoms rapidly declined daily, but he was able to manage a trip to California for the Shepherd’s Conference. He got back on March 4, and continued to decline, and March 7, we took him into the hospital due to severe pain. His first surgery was incredibly successful on March 9, and all of his pain was gone!

One week later, on March 16, he was back in the hospital for a spinal fluid leak repair. Again, surgery was incredibly successful, but his pain after surgery was intense. He healed well, although sore, and gradually was able to get back on his feet to some degree.

April 3, he was again back in the hospital for severe muscle spasms that had his back badly contorted like a pretzel. We were told to go into physical therapy and walk off the pain. Physical therapy did not do anything for him, and the pain, while it went away for a while, was always in the background.

May saw his nearly completely back on his feet and working almost as before, although with some pain. However, in mid-May, his back began worsening. On Monday, May 15, he said his back and his hip began to hurt and he went back to our chiropractor for an adjustment. The adjustment was gentle and successful, but his muscles were beginning to worsen. Wednesday, he had a deep massage, but felt even worse. By the end of that week, he was hurting so badly that he could no longer walk without help or extreme pain.

Monday, May 22, I took Eric in to see our family doctor, as he was just in so much pain that he could not bear it any longer. We had to find a solution. Nothing was working. Our doctor referred us to an acupuncture specialist he knew that was very experienced with Eric’s type of pain.

Tuesday, May 23, Eric had his first acupuncture appointment. The specialist was loudly horrified at the condition of Eric’s back when he took off his shirt for her to see. I could see in her eyes that she was extremely concerned. Later, while Eric was resting with the needles, the specialist spoke with me and told me that he was in much worse condition than she expected. Her facial expressions and the way she spoke told me more. Her eyes were worried and she looked almost as if she didn’t know if she could help him. He was in no better condition when we left than when we had gotten there. He has 2 more appointments this week, so my hope is that we can start breaking apart the muscle structure to get it to relax and he can start gaining relief from the intense pain.

Our family is doing whatever we can to encourage him, and we don’t really talk about the future, as we’re really not sure what that is going to look like, this summer.

I will update as things progress. Thank you all for praying. God is in control, and I am praying that He will make it plain what we need to do, and that we would glorify Him through this time.

Sometimes the road we take in life has unexpected twists and turns. Some open up to the most beautiful vistas imaginable. Others may open to some dark valleys and rough travel. No matter the road or where it leads us, we can be confident that there is One Who has traveled that road and knows where it will lead and every pitfall along the way, and He has promised to never abandon us as we walk on our journey. I invite you to join us on our journey, and see how it leads, as an adventure of life-changing proportions!